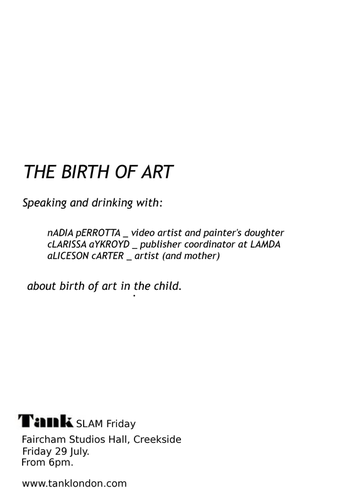 Tank presents a collaboration between mixed media artist's Aliceson Carter and Aoife van Linden Tol. Drifting through the city, daydreaming, in this sense does not lead the complex world of the imagination, full of impossible happenings or psychoanalytical learning's. Instead their work explores a state in between awareness, lost in the seduction of simplicity.

Adrift explores the almost hypnotic or meditative state of occupying ones own mind with small but significant observances within a public space . The loosing of ones self in such wonders contradicts the physical impossibility of getting lost on London. It is a reminder of ones singularity within the many, both comforting and isolating. The former being the overwhelming feeling for both artists.

Both No 1 and Fall Out deal with the perceived insignificance of the individual. Either not represented, as in the case of No 1, where lives are rounded up for graphic impact and to make the news of death more palatable. With Fall Out, the consequence of ignoring the importance of the individual in shaping our environment.

Spanning both floors of the gallery Sail, sets the building afloat and incoporates the video works Charing Cross and Rain, creating a billowing collaboration of installation and film. 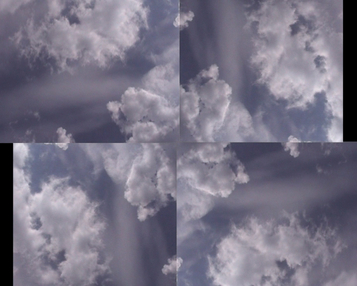 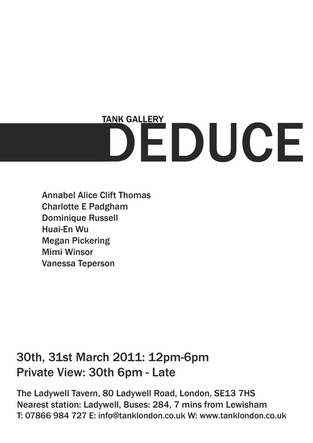 Tank is proud to present a unique sound installation by German artist Karl-Heinz Jeron. The idea for Fresh Music for Rotten Vegetables stems from Jeron's interest in how labour, product and art work is valued. Rotten vegetables are not waste but a commodity from which energy and industry can be drawn. Jeron has designed the exhibition based around a series of workshops where attendees source waste food locally, build unique singing device from simple components and add each one to the installation. By the close of show the orchestra will be sixty or so strong, emitting a cacophony of bleeps, beeps and hums.


Each device is tuned and setup to make them create a semi-aleatoric musical piece. In aleatory music aspects such as the ordering of a piece's sections, its rhythms, and even its pitches are decided at the moment of performance. Also called "chance music," aleatory music has been produced in abundance since 1945 by several composers, the most notable being John Cage, Pierre Boulez, and Iannis Xenakis. Within this project the chance aspect is be achieved by the change of the electrochemical state of the fruits/vegetables which will affect the tone, timbre and loudness.


This exhibition exemplifies Jeron's objective to subtly shift in social perceptions through engaging the audience in “artistic” practice. While waste and energy consumption are central to current world wide debates and politics, Fresh Music for Rotten Vegetables introduces the idea of potential alternative solutions within a local environment. Basic principles of turning the chemical energy from potatoes or carrots into electricity demonstrate a potential industry literally going to waste.

Landscape and painting, expanded in terms of materiality and metaphor is the point of departure for this collaborative exhibition over two floors in an old carriage house in South London. The country and the city are thematically inter-woven in an elaborate upstairs/ downstairs dialogue.

Maria Chevska’s painted cobblestones displayed in the ground floor gallery refer to the materiality of the street. Retrieved from just below the surface of the road, these slightly subterranean objects have considerable gravity as paintings. The painted stripes on the surface of the stones are records of palettes used on her main body of paintings. The cobblestones therefore act as a storage or file-code of colours. They also form a direct connection between the art produced in the studio and the urban landscape.

The title, eye of the black bird, is a fragment of a poem by Wallace Stevens that provides the common ground of modernism, language and materiality for the collaboration. The poem is described by Maria Chevska thus: ‘I enjoy the poem's proposal of ordering the world and it's sensations (Art), even if compressed into haiku-like form which amongst all its other qualities contains humour’.

The upstairs gallery houses Stephen lee’s juxtapositions of Plein- Air landscape painting of countryside with sculpted animals, human forms and objects. Characterised by a feeling of light, air and space, the work has the structural appearance of a poem of objects, clustered across continuous shelving. Closely tied to literary qualities of narrative and time, intrinsic to landscape, Lee describes his choice of subject matter: ‘I am particularly interested in places where human activity and objects interact with the surrounding environment to create a heightened sense of time as metaphor. This could be for example, a group of people fishing and picnicking by a river, a train-line, canal or motorway connecting to the city like a vein or a post-industrial zone, which has been partly re-absorbed into surrounding fields like a ruin’.

Tank is proud to present London based artist Emma Winter's debut solo exhibition in London. Winter's artistic practice spans installation, sculpture, interactive art, set design, art direction, curation, and performance. For A Trail of Tales Winter has created a unique installation piece at Tank that will instinctively engage and envelope the viewer. Using various locations across London throughout the year, visitors can embark on a journey that will start at Tank and take them to one of our local Deptford art galleries, into the heart of London's theatre district, and on to other secret locations across the city. What exactly will happen is part of the mystery and those taking part will have to follow clues to get there.

Winter's work somehow always leads her to a fantasy realm where one or several stories merge, unravel or follow a path. Party attributed to an overactive imagination, which inspires her reality, she explores how life is formed from fantasy and fantasy from life in many of her bold installations. With Chapter I:Through the Portal, Winter's intention is for the viewer to be sucked into the piece as if crossing a threshold. This first instalment is a whirlwind that takes the shape of multiple forms, each unique to individual imagination and perception, drawing up random literary extracts and tumbling them out reconfigured.

Used as a purveyor of morals, warnings, ideals and goals, it has been claimed that faerytails have a profound impact on child development, especially in learning how to overcome psychological conflicts. Many scholars and psychoanalysts have explored links with, sexual repression, gender roles, collective consciousness and Freud's theory of wish fulfilment. In most classic faerytails the wish is achieved and the happy ever after follows, yet in the multiplicity of real life, one wish is replaced with another as desires are met, lost or replaced. Winter believes the primary function of such stories is to act as a facilitator for continuously building a contemporary version from ones own desires. Thus, she aims to explore the boundary between imagination, existence and experience through creating her own illusions while inviting others to visit and momentarily make it their own.

The installation itself mimics the historical evolution of the faerytail and the vessels of it's distribution simultaneously. From wood to paper, from aural whisperings to printed literature, from individual books to multitudes of pages sewn together, the recycling of both the story and material are dominant themes. Even the books were saved from a skip and will go onto be transformed in the future.